Americans Together, a documentary 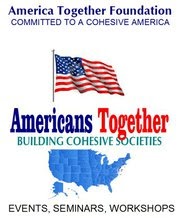 What a majority of Americans want is a just society where everyone feels safe, secure and without the fear of other. What exactly do we want? How will we make the change?  How do we convince those cashing in on hate and fear mongering? Can we find a way to make peace lucrative and redirect energy towards creating a cohesive America?

Our Founding Fathers laid the ground work for such a society, “We hold these truths to be self-evident, that all men are created equal, that they are endowed by their Creator with certain unalienable Rights, that among these are Life, Liberty and the pursuit of Happiness.”

Martin Luther King Jr. expressed that in his speech, “ I have a dream that my four little  children will one day live in a nation where they will not be judged by the color of their skin, but by the content of their character.”

Chief Seattle, a Native American said this perfectly, “All things are connected. Whatever befalls the earth befalls the sons of the earth. Man did not weave the web of life; he is merely a strand in it. Whatever he does to the webs, he does it to himself.”

The questions we face are;

1. What are we doing to preserve that delicate web?
2. What are our initiatives?
3. What are the issues that divide us?
4. How would we allay the prevalent phobias and fears?
5. What is your vision for America?

John F Kennedy, ”And so, my fellow Americans: ask not what yourcountry can do for you – ask what you can do for your country. My fellow citizens of the world: ask not what America will do for you, but what together we can do for the freedom of man.” We hope to capture your responses in a moving story about America. The “Occupy Movement” is a reflection of doing something. We need to channel that energy and passion in building a cohesive America.

Americans Together is a documentary about Americans working toward building that cohesive society. Our Mission is to build a cohesive America, where no American has to live with anxiety, discomfort or fear. We will highlight the role of the Muslims in this documentary.

It is time we bring fruition to the change we want, here is the first step in working towards building a cohesive America that is good for every one of the 312 Million Americans. Our focus will be overall prosperity rather than pitting one against the other.

Every American must feel a sense of security, safety and freedom. If we can learn to accept the otherness of others and respect the God given uniqueness of each one of us, then conflicts fade and solutions emerge.

“…We are one nation under God, indivisible with liberty and justice for all.” We are represented by every race, nationality, ethnicity, language, culture and religion. We see God as one, none and many and in every form; male, female, genderless and non-existent, being and non-being, nameless and with innumerable names. America Together Foundation is committed to preserve this pluralistic heritage of America.

The Prophets, Messengers of God, Spiritual masters, Wise Men and Women and the Peace Makers believed in peaceful co-existence of humanity and consistently solved differences and encouraging kindness among us all. Their effort was to bring about a positive change and create a cohesive society where no one was to be apprehensive of the other.

Prophet Muhammad, the peace maker, believed in peaceful co-existence and consistently mitigated conflicts and nurtured goodwill amongst various groups. He wanted to bring about a change and create a cohesive society where no one lived in fear.

We have begun on our plan to interview and present different perspectives representing the full spectrum of America from extreme right to the extreme left and most certainly the moderate majority. We started with the heads of major Muslim organizations and will be reaching out to every representation of America. It’s my commitment to work towards building a unified America.

We hope to document the efforts that go towards building a just America that every one desires and is doing something about it. This documentary, Americans Together,  will be released this year at a conference to be attended by political candidates, elected representatives, religious, civil, business and community leaders.

We are looking for stories;

We are  looking for partners:

If you know someone who has a story or who wants to help us, please let us know.

The purpose of “Americans Together” is to remove myths in open discussion forum. In that we will restore the cohesiveness of our society, working towards building a safe and secure America for every one of the 312 Million of us.

We have come a long way to embrace and accept our differences. However, this year has given rise to yet another temptation; to blame Islam, calling it an,”evil, evil religion” and calling its Prophet, ” a false prophet. No American has to live in fear of the other, nor live with  anxiety or discomfort.

Some have been misused and abused in the name of religion. As Americans, are we going to let that happen? No, we can pull ourselves together and not fall for the temptation to divide us.

Goodness will come to our rescue, if we make an effort. Mike Ghouse adds, “As members of diverse family of faiths, we seek to demystify the myths, malice and falsification of our respective faiths. It is time for all of us to gather and understand each other and purge ourselves from ill-will towards fellow Americans.”

Americans Together is an educational and pragmatic initiative to weed out myths from reality, which is hurting the social cohesiveness of America. The myths are vigorously propagated by a few to disrupt the delicate balance in our society by pitting one American against the other for their own perceived gains.

Ever since we declared our independence, we have been tested time and again by various political, economic and religious forces to divide us, however, at the end we have come out strong as one nation. Let’s take that first step in bringing a positive change through dialogue.

As a society, it is our individual and collective responsibility to keep law and order and faithfully guard the safety of every citizen. Hate, prejudice and stereotyping are some of the many root causes of disrupting peace in a society. It is our duty to track down the source of such ill-will and work on mitigating it.

Mike Ghouse is committed to building a cohesive America and offers pluralistic solutions on issues of the day, to the media and the public. He is a speaker, thinker and a writer on the topics of pluralism, cohesive societies, politics, Islam, interfaith, India and peace. Over a thousand articles have been published on these topics and two of his books on Pluralism and Islam are poised to be released.

Mike’s work is reflected in 4 website’s and 27 Blogs indexed atwww.mikeghouse.net,  and you can find all of his current articles atwww.TheGhousediary.com